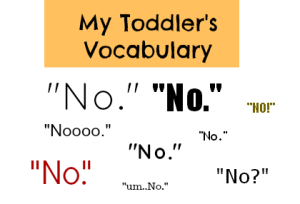 Firstly, guess what word has suddenly found its way out of Paige’s mouth…yup, you guessed it…NO!

At 18 months and 10 days she has decided that now is a good time to vocalise her refusal to do things, instead of just shaking her head like a crazy person or running away shrieking with laughter at her own defiance.

And she doesn’t just say No!, she says No-No-No-No-No…and it goes on, all with a big grin across her smug, adorable little face.  (cheeky little bugger)

She already has a handful of other little words under her belt (that we can understand) and quite a few of her own vocab concoctions that she uses to talk about certain things, like favourite toys, or the dogs, or things that we see when out and about.

But wait, now instead of just kicking and screaming when you pull her away from a game to change her nappy, she is adding the No-No-No-No-No to her little script – in quite a loud and high pitched manner.  The neighbours must think we are completely batty.  I know that (most) parents across the globe experience a phase with their kids when nappy changing becomes the most exhausting activity known to man – but wow has Paige got her prevention tactics down to a fine art.  It has become physically dangerous.  I am not even kidding!  First you actually have to catch her,  and then get her to lie still for more than 5 seconds.  With the kangaroo punches, pony kicks and sudden rotations (like crocodiles do when they are attacking their lunch)  you have to be on guard at all times to avoid her making contact to any of your own body parts – those pony kicks are hectic.

All I can say is changing nappies during this unbearable phase is not for sissies, and I can only hope that it doesn’t last too much longer because being preggers in my first trimester is tiring enough without a full workout every time Paige needs a new nappy.  I am quite literally out of breath by the time the chore is over with and all she does is quietly get down onto the floor, and toddles off back to whatever she was doing before…leaving me to pick up wet wipes, the bum cream, other clean nappies ripped from their bag and any toys she might have been holding that were thrown around the room.  Hurricane Paige strikes again.

Yesterday was South Africa’s Elections 2014 and yes I sort-of-followed the debates from the top parties and yes of course i voted.

However, this post is definitely not about the actual politics though so feel free to keep reading…

It was declared a public holiday to enable all registered voters to put their ‘X’ on the long stream of ballot paper, and the voting stations opened at 7am.

Terry and I decided to go at around 7h30 (which in parent speak means closer to 7h45/8h00) and were standing in the line by 8am.  We took Paige with us in her stroller, not to get to the front of the line, but because all of our usual baby dumping ground people were also voting.

We found ourselves standing behind a shy young girl who was voting for the first time, and in front of her was a young guy, clearly more confident about the day’s events.  He and I got chatting while Terry un-clipped the little monster and proceeded to walk her up and down the line to stop her from having an impending stropp in her stroller.  Mondli (the young guy) and I witnessed a few parents arrive and walk straight to the front, with their little ones in tow, obviously to score a place at the front.  He suggested we ask one of the officials if we could do the same.  I wasn’t sure but Terry was keen, so i walked up to the first official I saw.

Wouldn’t you know it, at that exact moment I must have started spewing pig latin or some other distant language from my mouth because the official looked utterly confused by my question.  I gave up after a minute of trying to use pointing and hand gestures to explain my complicated query:  “Can parent’s with small children go to the front of the line?”

When I got back to Terry, Mondli and Shy-Girl they thought the situation quite funny as they had overheard and witnessed it all.  Terry and I made the decision to not even bother as Paige seemed quite happy trotting up and down the line waving at everyone, so we stayed where we were, with everyone else, moving at a pace that can only be described as almost-backwards.

Terry, Mondli, Shy-Girl and I proceeded to have a few rolling conversations – you know how it goes, you start talking about one thing and by the time you finish you have been through at least 10 different topics, ending on something that has absolutely nothing to do with what got you all started in the first place.  It was quite pleasant 🙂

We were in line for 1 hour and 52 minutes (yes, I timed it) before we eventually arrived at the actual entrance to the building.  Then it was a short 5 minutes to get up the stairs, scanned and given our ballot papers to cast our vote.  And there, directly in front of us, was the reason for the almost 2 hour wait – there were only two ballot cubicles!  Thousands and thousands of people registered at this one voting station, who have to get through between 7am – 9pm that day, and they limit us to two ballot cubicles.  Idiots.

Anyway, on the way out we had to walk back down the line winding around outside, and jeez did we get some stinky looks from some of the people still waiting.

Well, I was understandably NOT impressed by that, and I proceeded to slow down in front of that ignorant twit, and project my voice so that most of the line could hear…

“We waited in this exact line, with our 14 month old child, and a sick person sniffling and breathing on my back, for 2 hours just like everybody else, to vote for a better future for our daughter, so I suggest you focus on why you are here instead of for how long.” 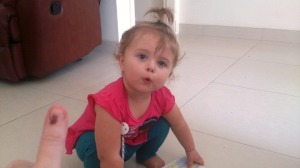 …most of the time. 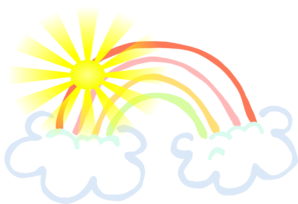 Being a mom is such a blessing and I can honestly say that days spent with my little monkey are filled with joy and laughter…these are what memories are made of…good times.

The thing is though, kids are kids…and kids can be horrid little monsters.  One second it’s all smiles and sunshine and rainbows, and the next moment (usually when you are about to get up to go to the loo, or start dinner) it morphs into something else…a whirlwind blows in, bringing thunderstorms and lightning and crocodile tears the size of golf balls. 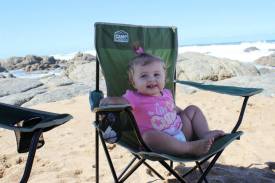 there literally was a rainbow the day before this beach day 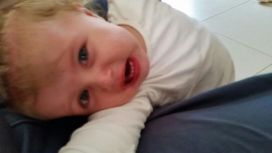 My husband and I are actually getting quite good at not re-acting when Paige decides to throw a hissy fit because she wants to put the TV remote in her mouth and we won’t let her…among other things.

We quickly assess if she has hurt herself or not, and note the time to determine if she is due for a nappy change / food / nap…and if none of these apply then we proceed to ignore the heck out of her.

Don’t make eye contact with the monster – if you can’t see it, then it can’t see you…right? .
If you just ignore it then maybe it will go away.
(Ok, so not go away, but maybe calm down a little)

It usually only takes a minute before Paige realises that this tactic is not working, and she switches off the waterworks and waddles over to her play mat to do something more interesting.  This is when one of us will slide onto the floor next to her and play.

I realise that this is common sense but sometimes us parents out there just need a little reminder about the obvious.

Overall, Paige is generally a really happy and quirky little person.  She waves at everyone in the shops and often flashes her teeny pearly whites to who ever is looking at her.  And even though she can’t string a sentence together yet to save her life, she is quite hilarious and has some favourite little actions and noises that she pulls out when she’s in the mood for some banter fun.

I think the thing us adults need to remember is that kids are people to (duh) and we all have bad days sometimes (some more often than others) so of course our little angels are also going to wake up on the wrong side of the crib some mornings, and behave like they have been possessed by demons in the night.  BUT, this too shall pass, and in a few hours they will get over it and be back to their gorgeous happy little selves that we cannot help but love with all of our being.

It’s not always sunshine and rainbows, but I think a storm every now and then keeps us on our toes.